I'm just back from Tiverton Balloon Festival with some nice shots, I hope. I will upload some photos during the week but here are a couple to start the page. 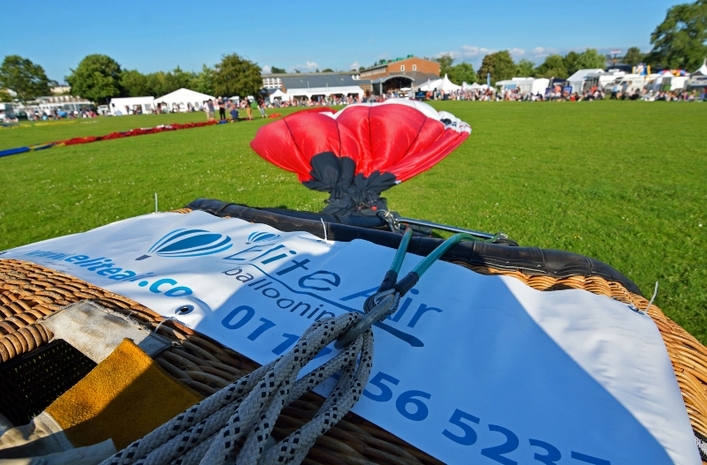 DEFLATED
A balloon rolled out by it's basket. 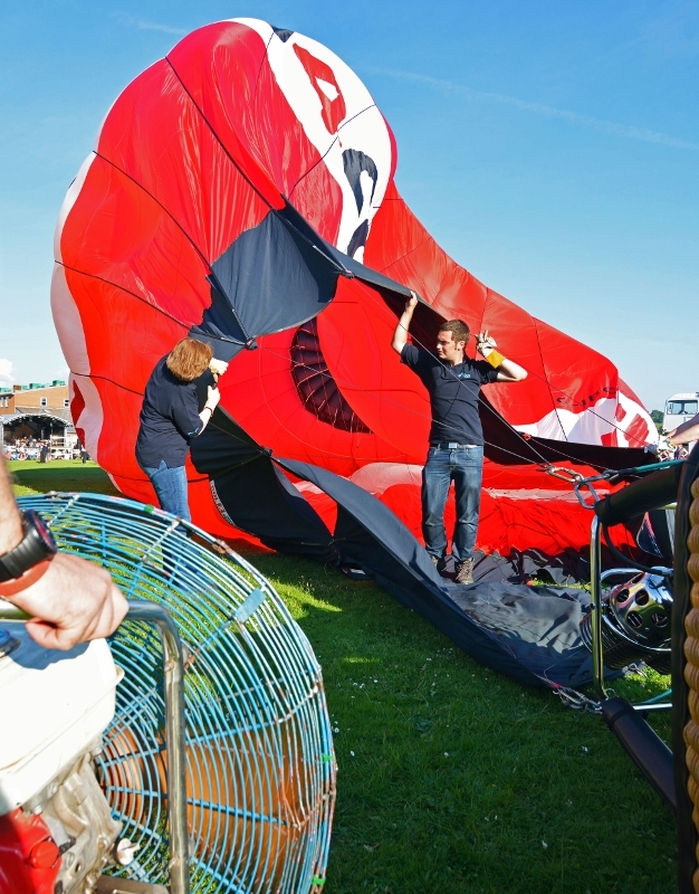 BREEZY WORK
Large industrial fans are used to initially fill the balloon with a large volume of air. 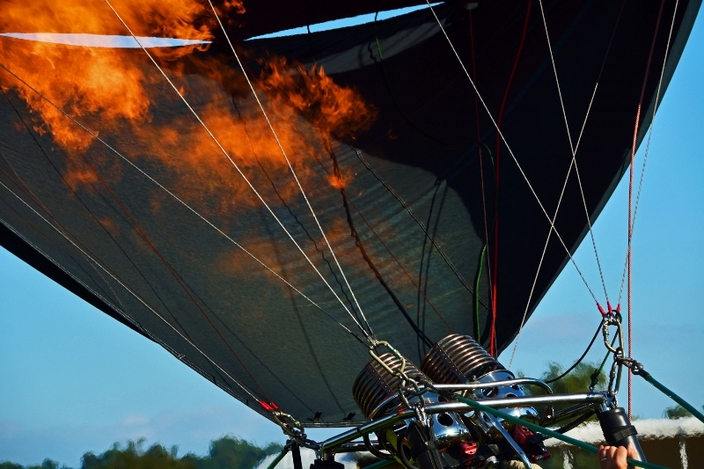 Propane gas burners are used to power the balloons. 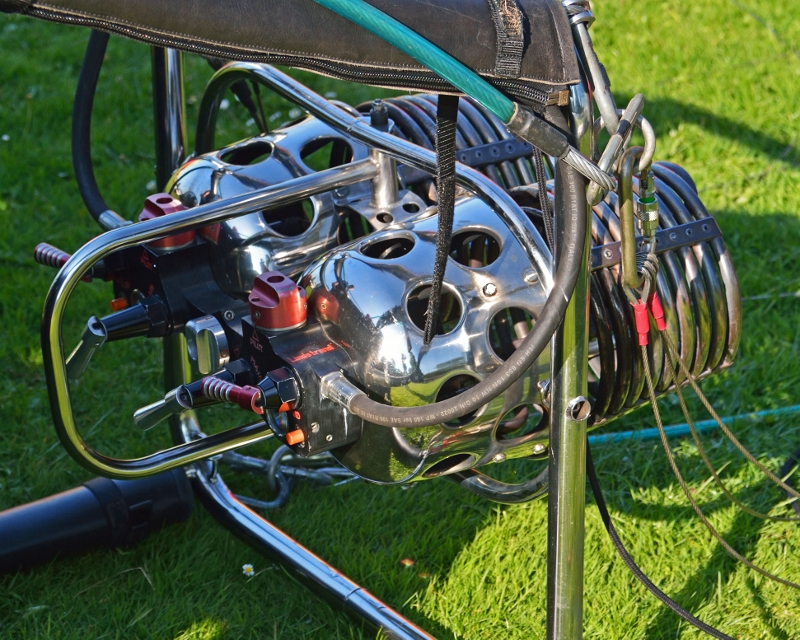 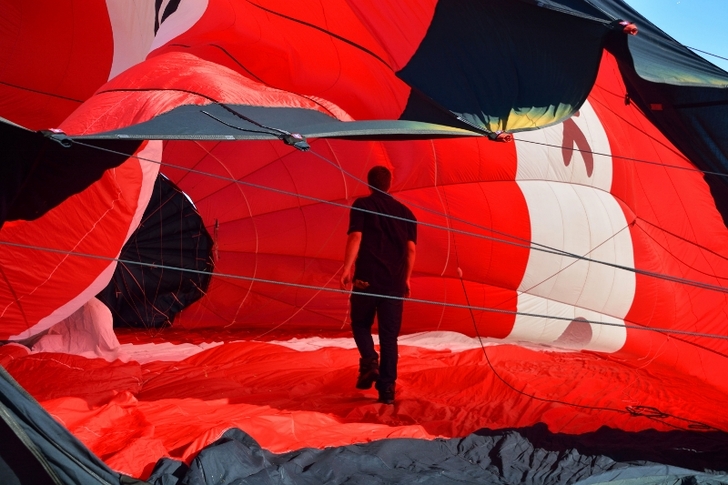 THE CANOPY
The huge size of the canopy can be appreciated by the way it dwarfs a person. Air from a large fan is used to initially get a large amount of air into the canopy. 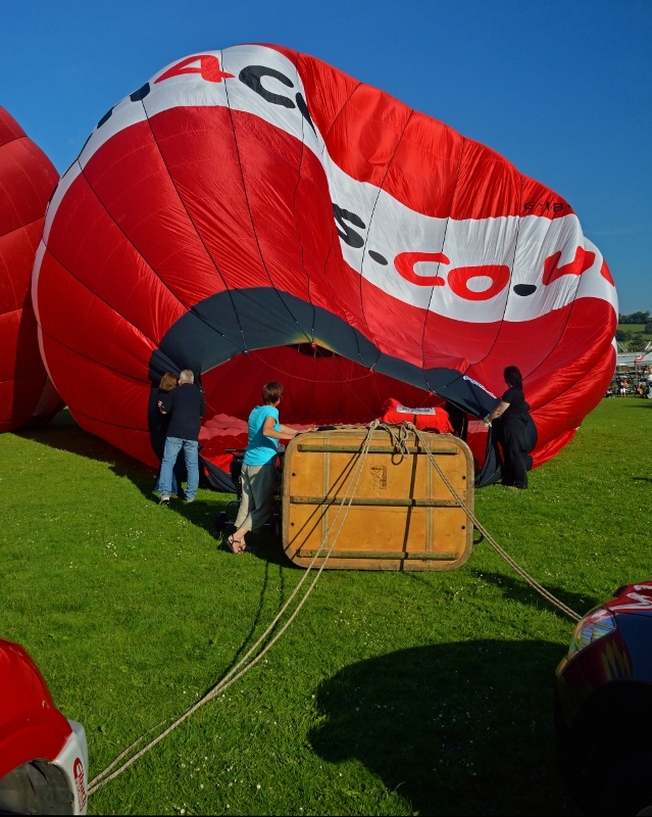 NEARLY THERE !
The basket starts off on it's side, so you have to lie down inside it then, as the balloon inflates, you are gradually turned upright. 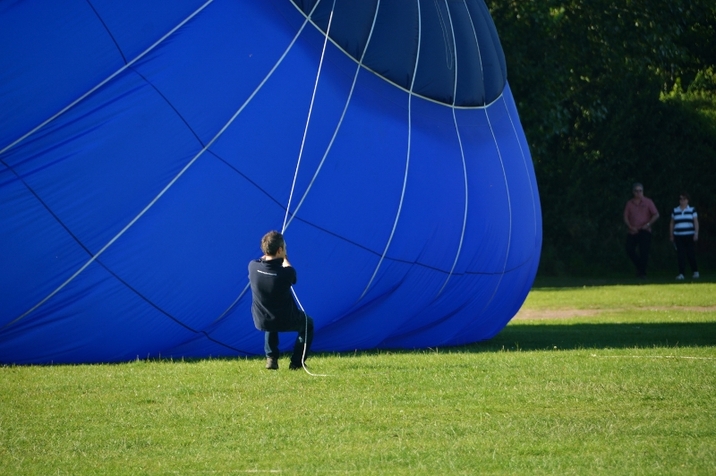 HOLD ON !
Keeping a balloon steady in anything less than a very gentle breeze can be very tricky. A good, strong ground crew is essential. 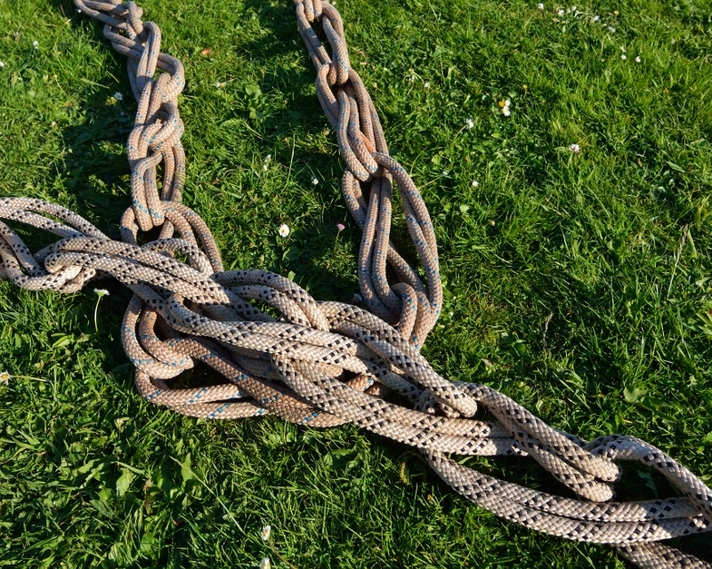 The guide ropes are coiled in this manner for storage. A quick pull on the rope unravels it very quickly. 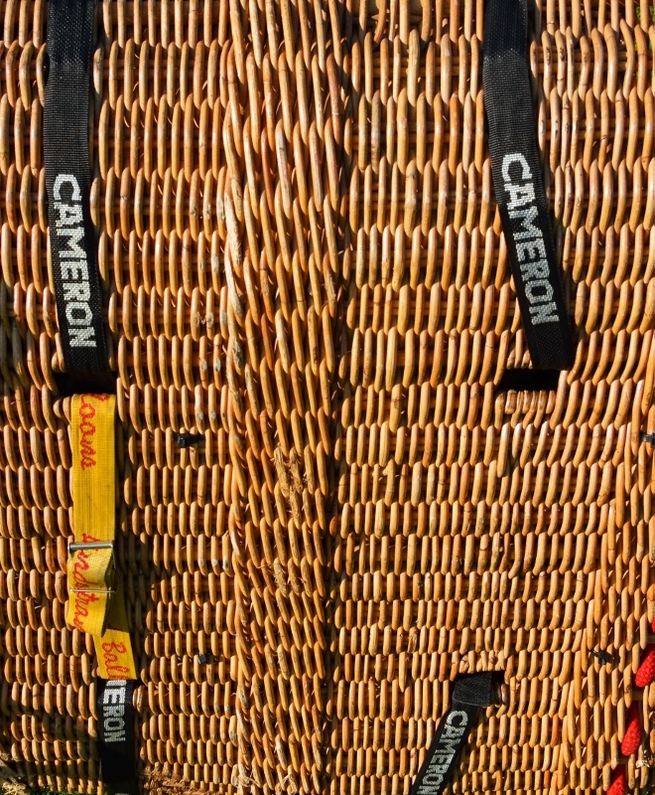 THE BASKET
Baskets vary in size, but are made of wicker for strength with flexibility to take heavy landings. Many hot-air balloons are made by locally by Cameron of Bristol. 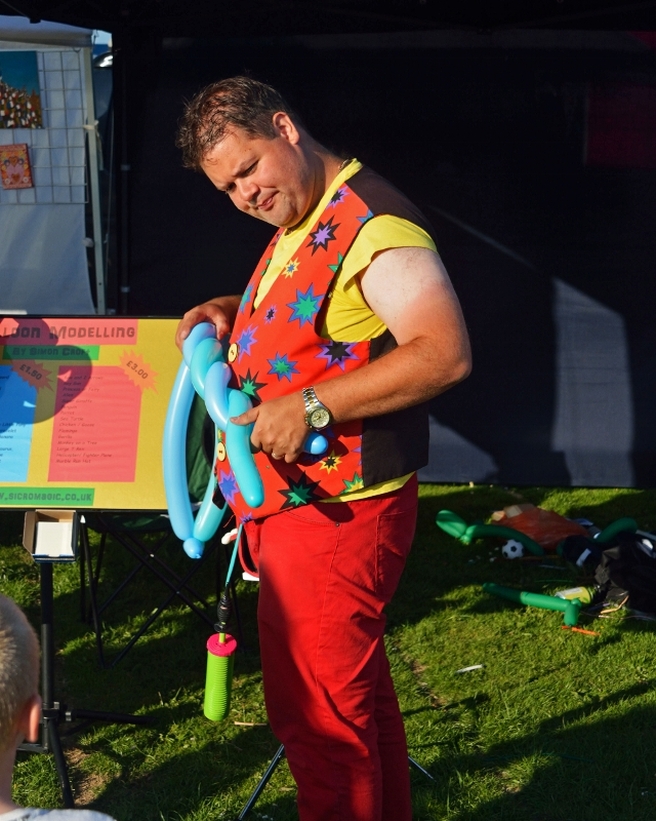 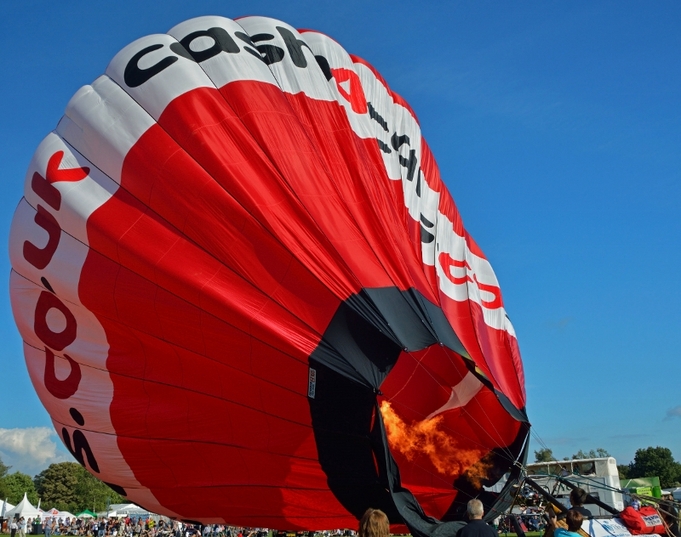 THE COST OF INFLATION
Propane gas isn't cheap then there is the cost of the balloon, basket, ground crew, trailer and 4x4. No wonder a balloon ride is not exactly cheap. However, the experience is PRICELESS.... 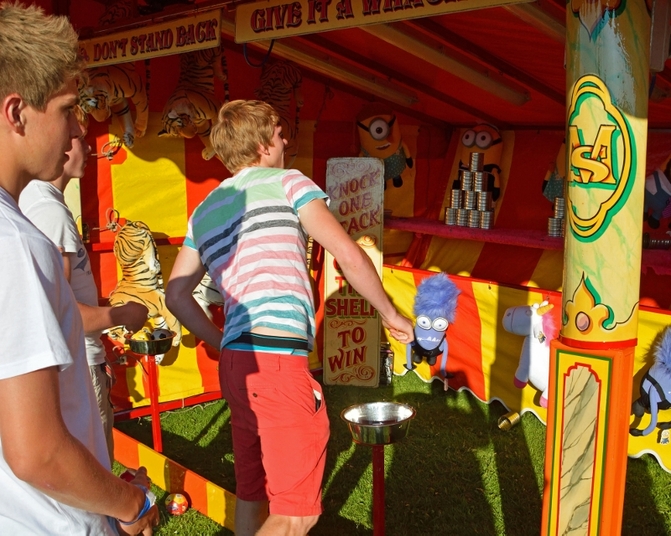 ALL THE FUN OF THE FAIR
Some lads have fun trying to knock down a stack of cans at this stall. 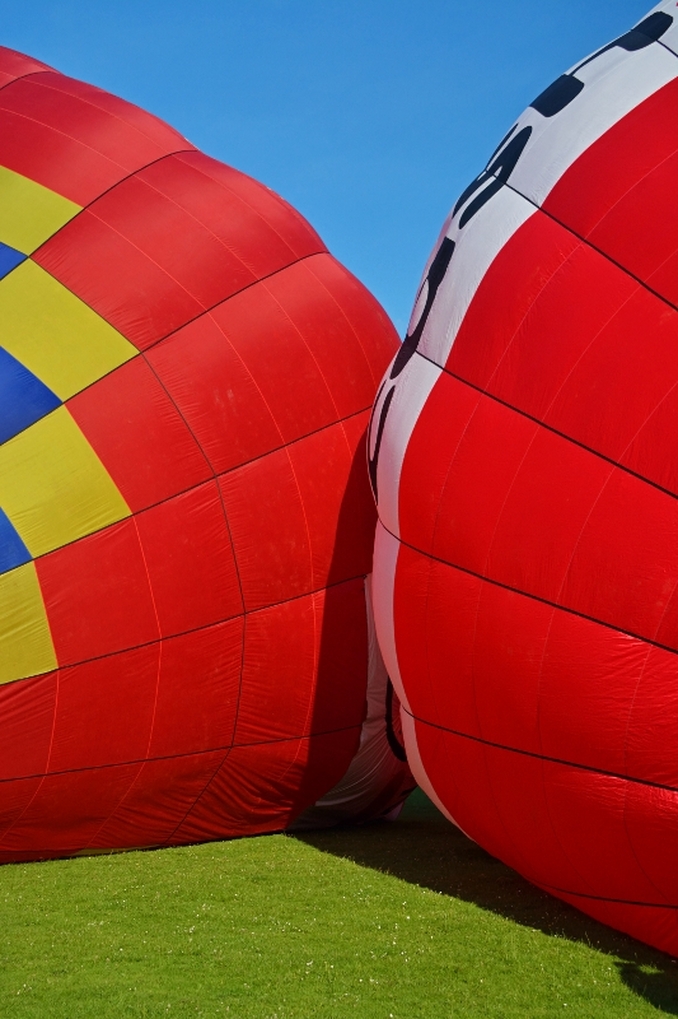 SIDE BY SIDE
Two partly inflated balloons lie side by side. The colours are stunning. 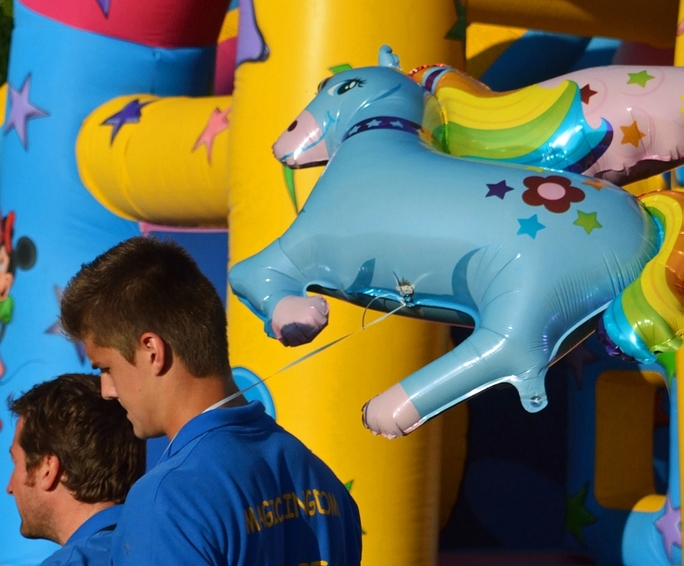 FOREVER YOUNG
Some people never tire of playing with balloons ! 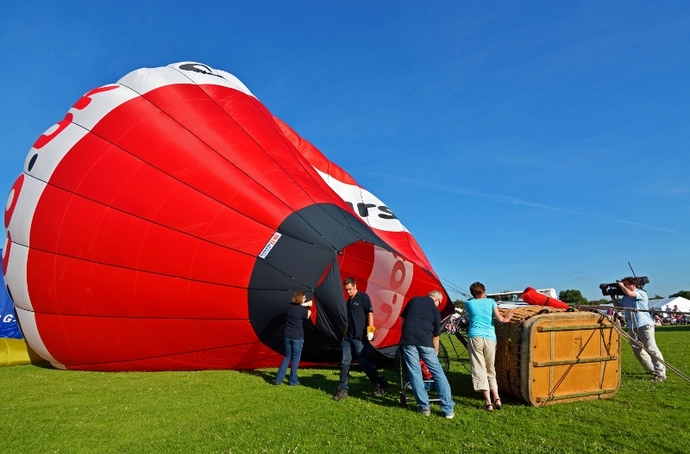 FAME !
A TV cameraman was on hand to capture all the action. 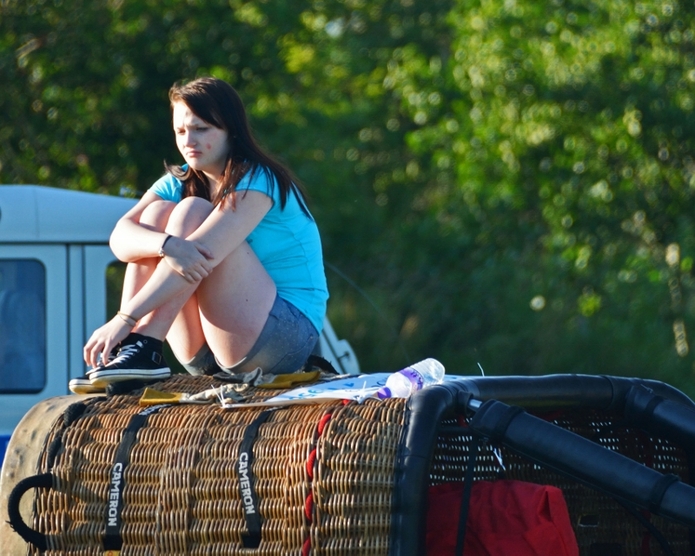 GROUNDED
One of the ground crew takes a well earned break in the evening sun.

ATTRACTIONS
There were other more worldly attractions to tempt visitors at the festival.... 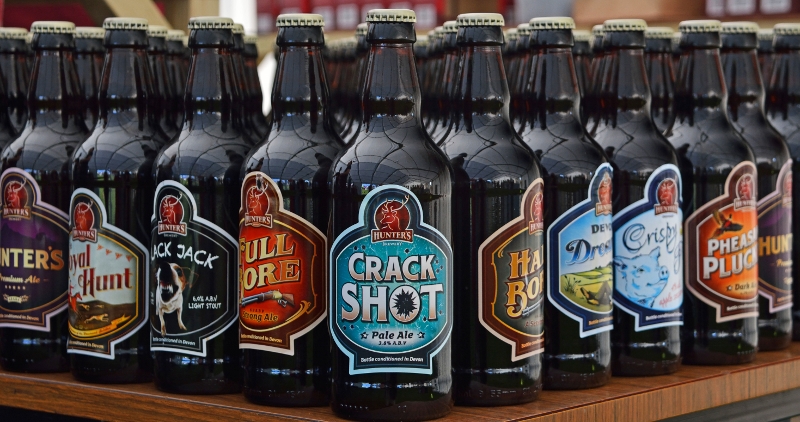 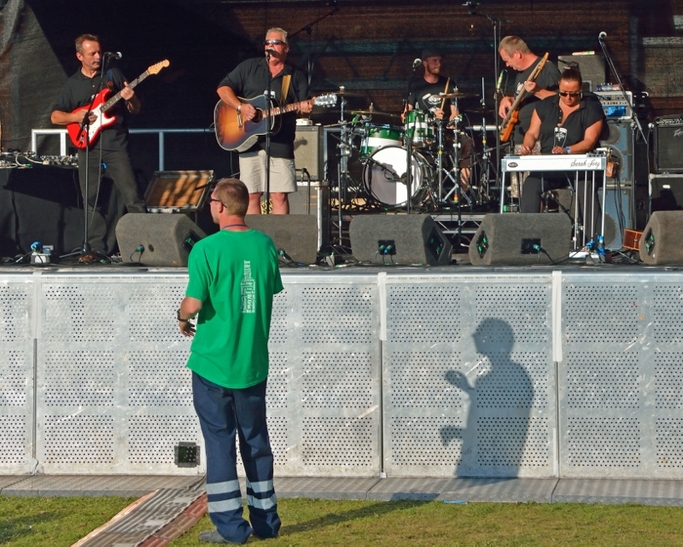 SOLE BAND
However, some were more popular than others... 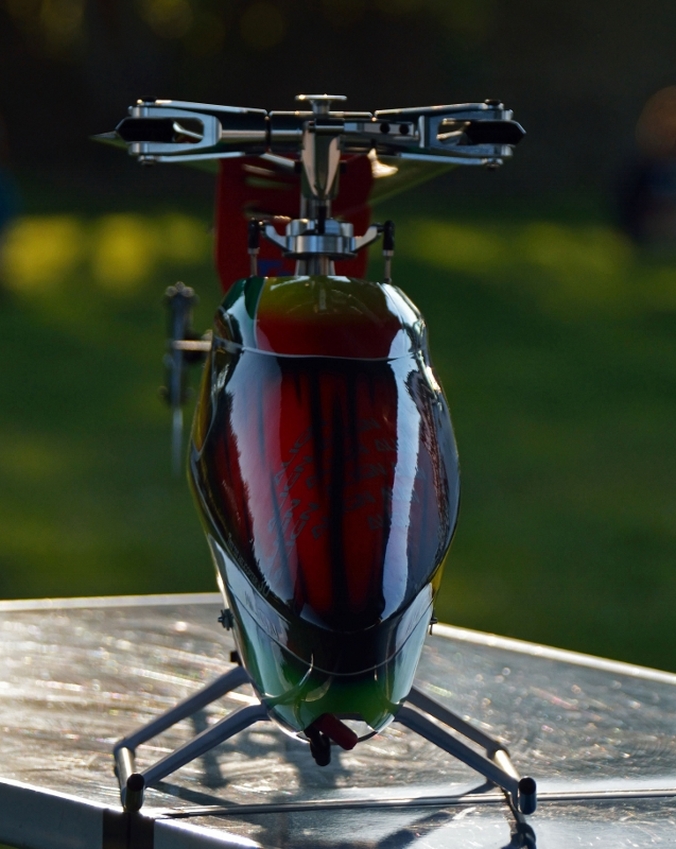 HELICOPTER
Other attractions included a flying display by Newton Abbot HeliClub. This one awaits it's rotors. 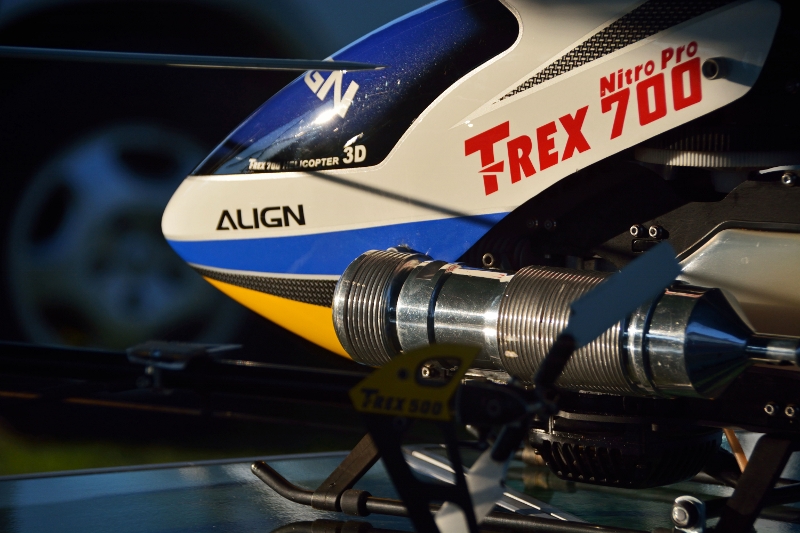 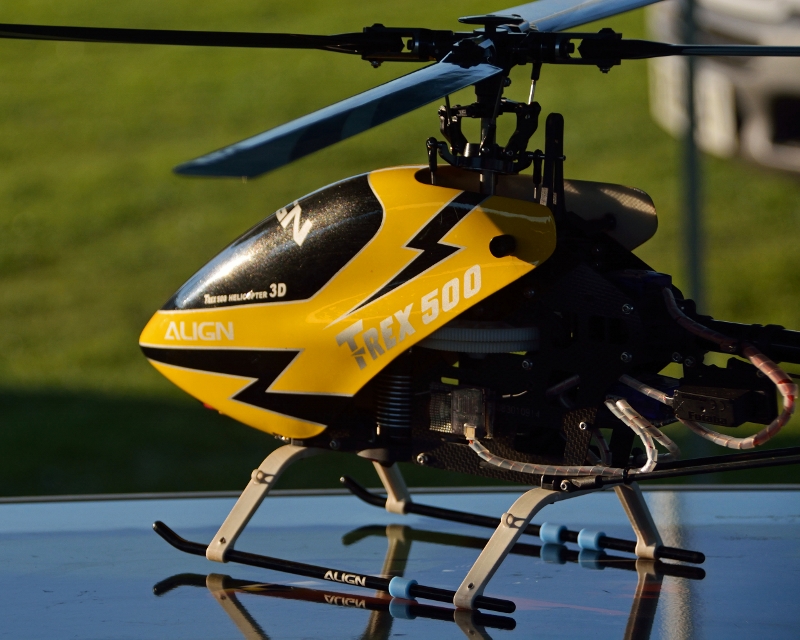 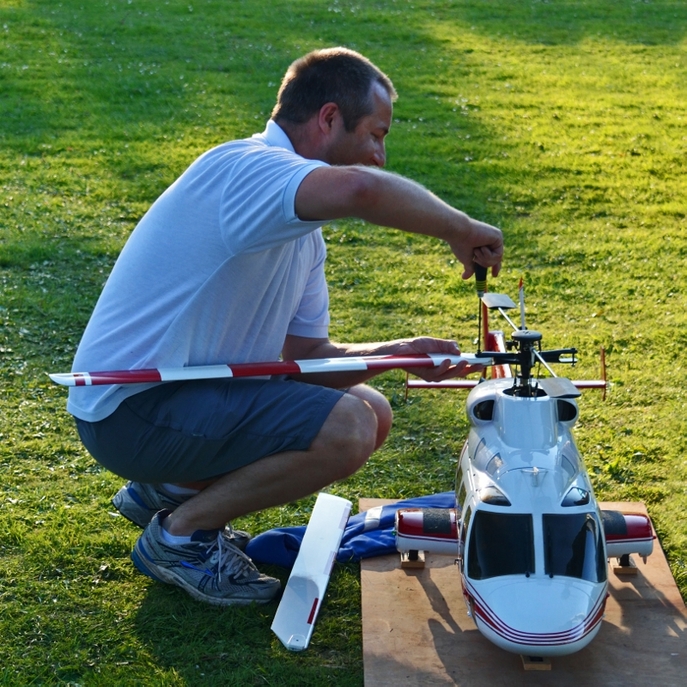 THE IMPORTANT BITS
The fixing of the rotors is the important bit. It is vital that they are fully secured. 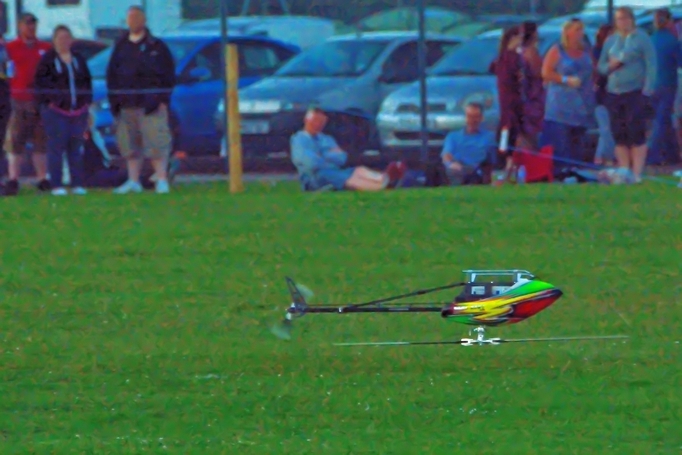 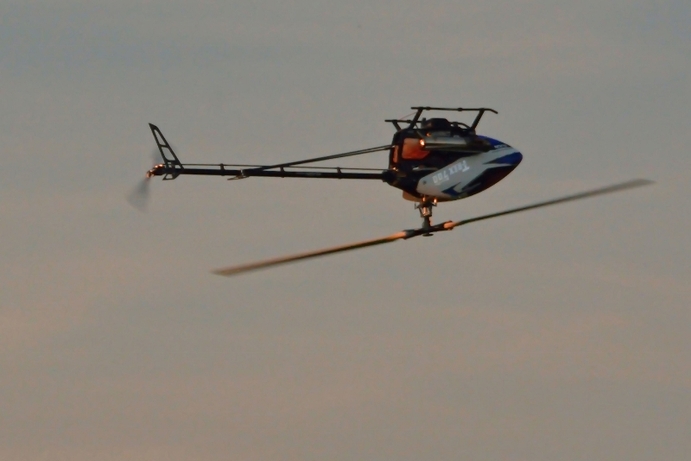 EVENING FLIGHT
Another stunt helicopter caught in the fading light. 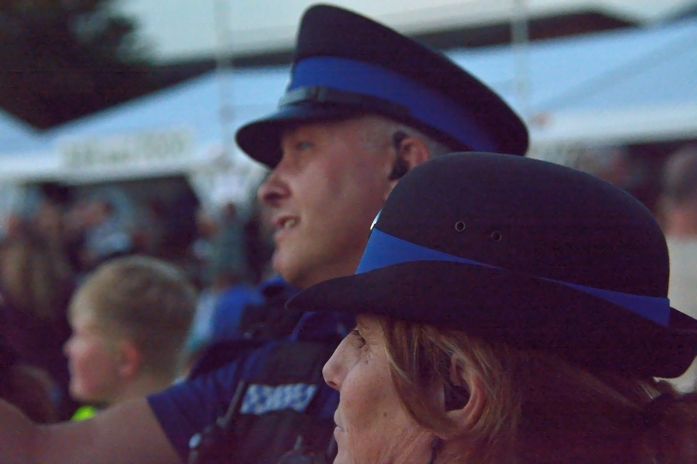 HELLO, HELLO, HELLO
The air display catches the attention of the local police.... 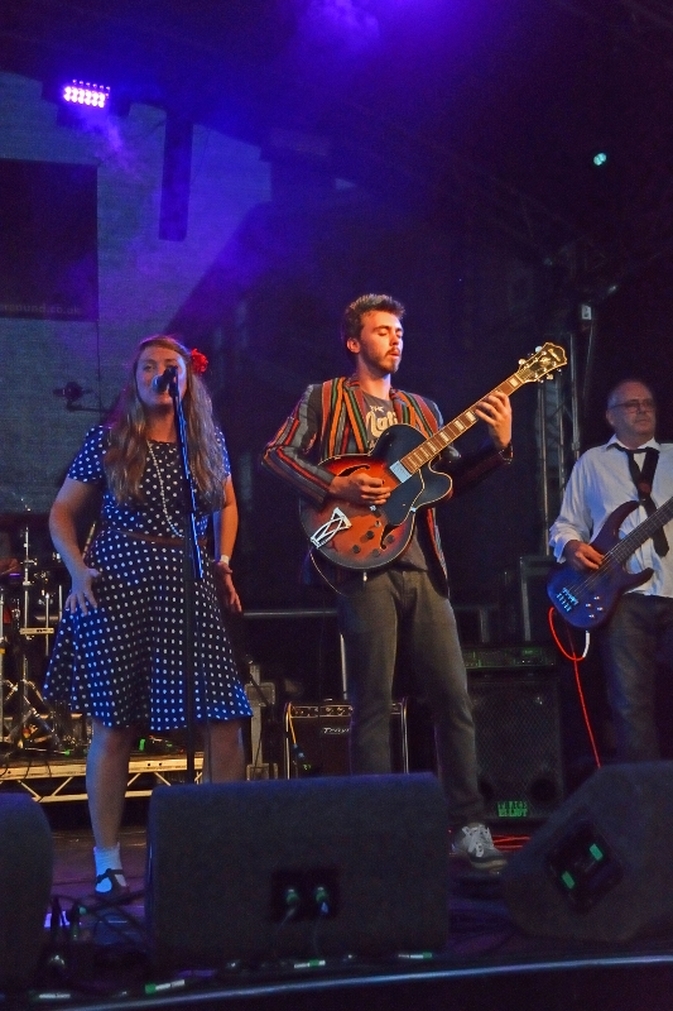 MUSIC MAKERS
There were lots of great live music acts. 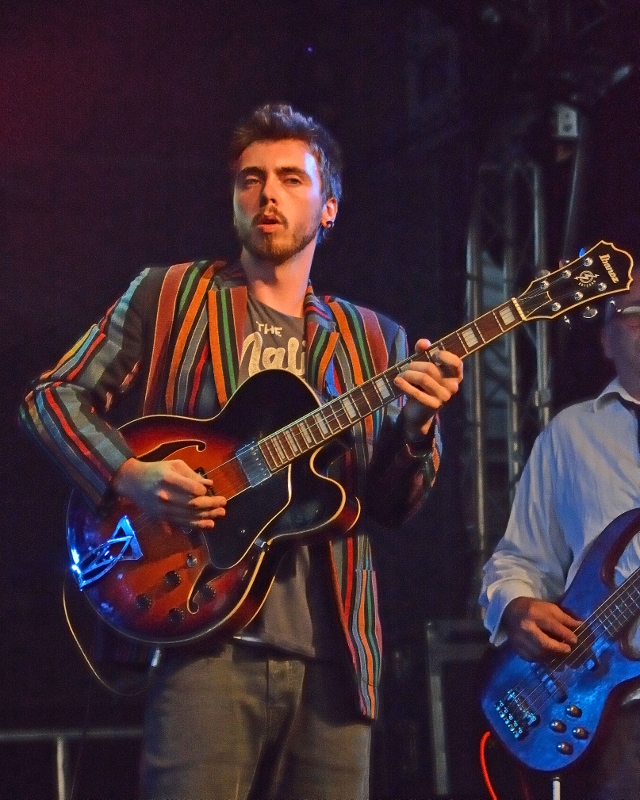 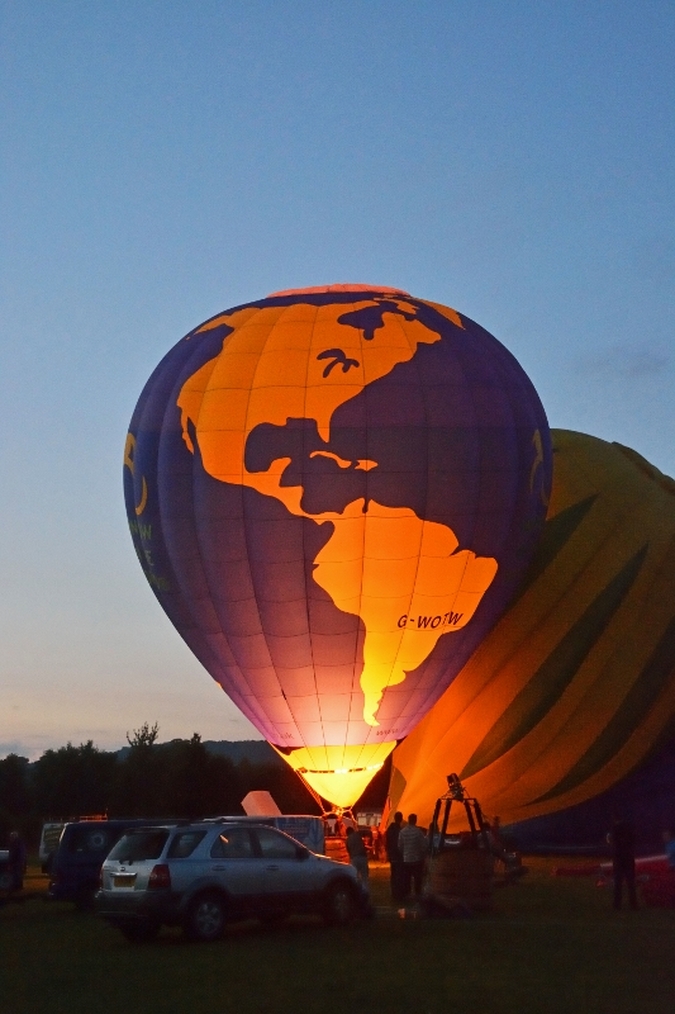 THE WORLD AGLOW
As darkness began to descend, the balloons prepared for the glow.

THE GLOW
The climax of the event is "The Glow", when all the balloons illuminate to music in a spectacular of sound and vision. 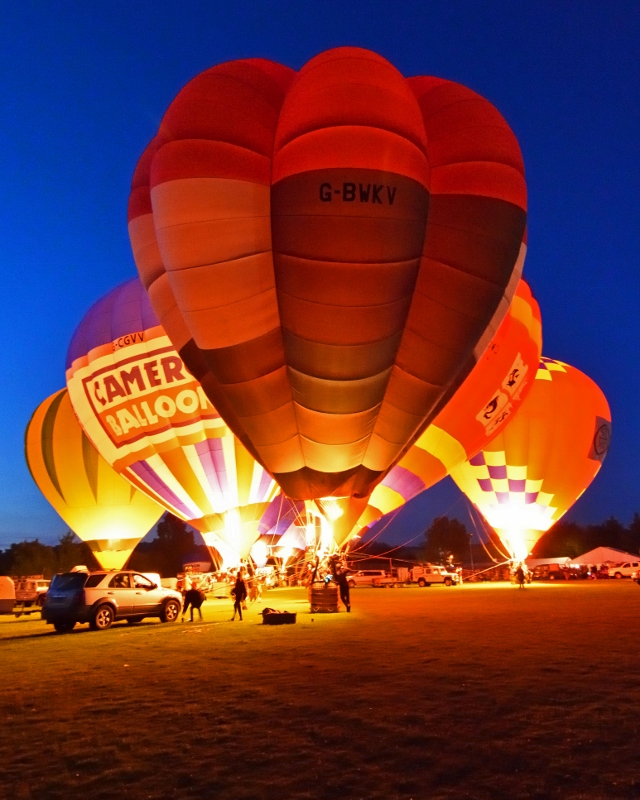 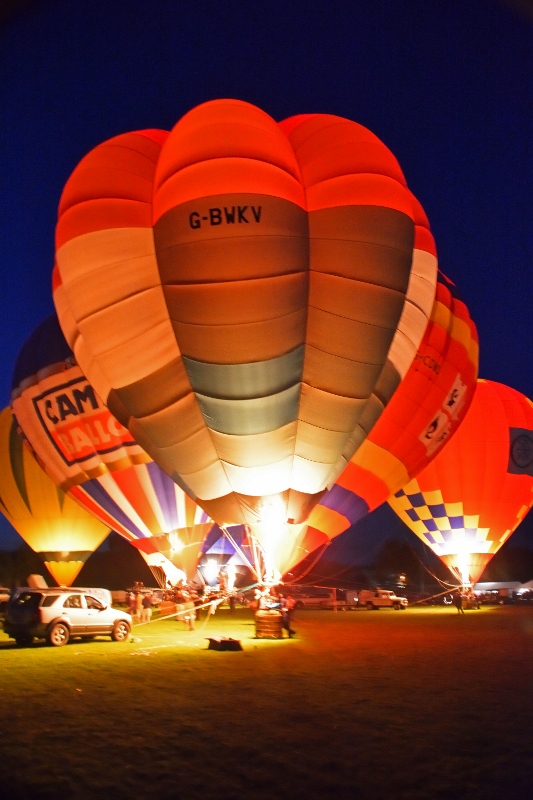 THANKS
Many thanks to the staff at Tiverton Balloon Festival and to the very friendly crew from Elite Air Ballooning and Cash4Cars Balloon Team.
Google Analytics